The Watch and Case Works of John C. Dueber

In my last blog I talked about the cyclone hitting the newly constructed Dueber-Hampden Watch Works just days before it was to open. According to James Gibbs' book; From Springfield to Moscow: The Complete Dueber-Hampden Story, the almost completed south wing meant to house the watch works was completely leveled. Gibbs reports the company had no insurance for the $15,000 dollar loss (10).

Once the Watch Works buildings were repaired, the move from Springfield to Canton became the next biggest chapter in the Dueber-Hampden story. Watch makers from Hampden County in Springfield, Massachusetts required two special trains to move to Canton. The first four hundred workers arrived in Canton on August 1888 to begin work. The effect of the loss of employees to Springfield was tremendous.

The Hampden Watch Company had been Springfield's leading industry. More than 600 mechanics worked at the watch factory. More than Smith-Wesson and the Armory combined. In addition, these were not just the best mechanics, but the highest paid. As Gibbs reports, think of the sadness that fell over Springfield and Hampden County when the announcement came that the Watch Works would be moving to Canton along with those skilled and highly paid workmen and their families. 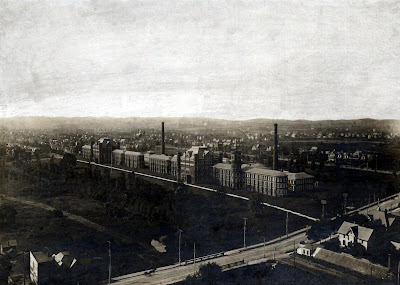 John C. Dueber had a sense of humor because he built the case factory on the north side some 57 feet longer than the watch building. The reason is that Dueber's affection was for the Case Works where he originally started and where his heart remained. The Case Works did not begin operations until a year after the Watch Works because it took nearly two years to move the machinery equipment and other supplies to Canton. Once operational the Case Works began producing 15,000 cases per week. After the first year the Watch Works was producing 600 watches with 1,000 workers. The net from both companies was close to $2,600,000 in 1890 (Gibbs, 13).

Collector Edward Thouvenin said the buildings were constructed north to south with a narrow width building and larger windows top to bottom so that those huge windows on either side of the factory could catch the east and west sunlight during the brightest part of the day, and then also be supplemented by gas lights. The image below shows Dueber-Hampden workers at the Canton plant working near those large windows. 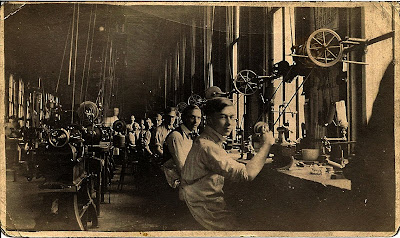 One can only imagine the watch maker or case manufacturer hunched over his or her bench meticulously adjusting the time piece, or laboriously engineering the case with the crudest of tools, and yet, looking at the watch cases from that time period each piece is nothing short of artistry. As one of my contacts tells me, the Dueber-Hampden is the underappreciated watch. One jeweler said this is a good watch and most early Canton jewelers who still have a legacy in the area learned their bench skills starting with the Dueber-Hampden Watch Works but he added this watch is not one of the more desirable watches to be collected, but one folks feel nostalgic about because of the Canton connection.

I wasn't sure who I would find who has an interest in Dueber-Hampden's watches and history. Watch collectors are a special niche and many aren't on the internet. However, I have been lucky this far to find from the historical aspect, John C. Dueber's sister's granddaughter Paula Holmes who is still a resident of Cincinnati. I am looking forward to continued conversations with her to bring more to our interest in the historical Duebers. I also interviewed Ralph Goodenberger and he has shared his grandfather's Russian scrap book. Mr. Goodenberger's grandfather led the company to Russia. It is so much fun to uncover a hidden part of Canton's history, and I look forward to sharing more of these interesting interviews along with the Dueber-Hampden history in my future blogs.

In the last few weeks I had the opportunity to travel in the The Pacific Northwest. One of the highlights was in Seattle. Asking for directions on the link train, I met a young student from the University, Joseph Vo, " The Seattle Kid", who pointed out the highlights of the city. Joe is a bio-chemistry student heading to medical school to become a surgeon. He made sure I had my bearings, and was able to navigated the city without getting lost.

What an ambassador for the City of Seattle. Thanks Joe and Good Luck with your education!!

If you found this interesting, please consider joining us on Dueber-Hampden Facebook, or tweeting the linkhttp://dueber-hampden.blogspot.com/

Posted by Lee Horrisberger at 5:37 PM

Promote Your Page Too

Lee Horrisberger
I am researching and blogging about the history of the Dueber-Hampden Watch Works.